Beware of the Icefall

Let’s first start by explaining what an icefall actually is, and then we can go on to describe how to avoid them efficiently so you can keep your home safe and sound. 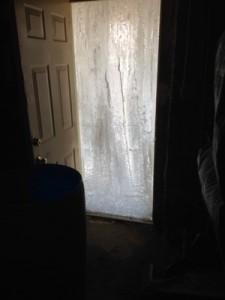 There are many forms of icefalls, and some of them are naturally occurring such as when a regular waterfall area turns to ice and forms an icefall. Beyond the natural world, such formations can also be created on the edges of buildings, but the essential process of creation is the same.

For homeowners, an icefall is an accumulation of ice that forms on, and hangs off of a home’s eaves, and usually at the gutters or other drainage points where meltwater can refreeze.

Many times an icefall forms from an ice dam which is a regular occurrence wherever heavy snowfall and temperature fluctuations coincide.

An ice dam can occur when rising heat from the interior of the home is elevated to the attic where it can melt off the lower layers of snow closest to the heat. This melting water flows down to the gutters or other drainage areas where it accumulates and can refreeze.

If this happens regularly in a freeze-thaw-freeze cycle, an ice dam will likely follow. If an ice dam forms, and there is continued supply of meltwater coupled with freezing temperatures at night, an icefall will follow.

The reason that this is important is because an ice dam and especially and ice can ruin the layers of roofing that keep your home safe, dry, and free of water or structural damages.

There are many different ways to prevent icefalls from forming and they range from common sense to Rube Goldberg devices that are over-engineered and expensive.

Here are some of those options…

One of the best ways to prevent an ice dam, and thus an icefall is to clean out your gutters at least once a year.

Debris and leaf matter that collects in your gutters can create obstructions that may prevent the flow of water out of the roofing drainage system.

If this happens during the winter months, that melting water will form a pool that freezes on the roof and builds up to form an ice dam.

When this happens any additional water that melts from the roof during the day will overflow the dam and begin to form an icefall. Simply cleaning out your gutters can ensure that any melting water will have a quick route to the ground.

Gutters are the most common places where icefalls begin to accumulate, but they aren’t the only culprits to consider. Ice dams and icefalls can also form near your chimney or exhaust vents, or even on debris that can accumulate on your roof if uncleaned.

Branches, leaf matter, and even loose shingles can be the starting point for icefalls to form.

If enough ice collects at any of these points, it can begin to form an icefall. Maintaining your roof is a solid method to prevent any ice buildup and thus to prevent ice dams and icefalls.

Get A Gutter Warmer

While this is the most expensive option to prevent icefalls, gutter warmers definitely do the job. A gutter warmer is essentially a well-insulated electric strip that heats up when turned on and begins to melt any existing ice buildups in gutters. 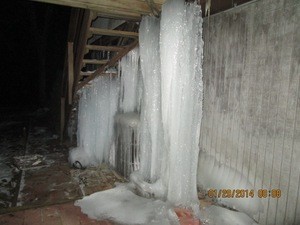 Typically, a gutter heater looks like a rope light and functions in much the same way.

They are flexible and can be installed easily by the homeowner, but they are power hogs.

And this is why it’s vastly cheaper to prevent the formation of an icefall than it is to eliminate one with gutter heaters after it has formed.

If you live in a cold climate part of the country, then you should definitely employ one or all of the above methods for preventing icefalls in your home because they can absolutely devastate the structural integrity of your roofline.

When ice infiltrates the protective layers of your roof such as beneath shingles or under the tar paper and flashing, it will undoubtedly spread these materials apart and cause leaking when the outside temperature heats up. This can easily be avoided, and doing so is critical for the long term maintenance of your property.

Have you ever had an icefall? If so, what happened?